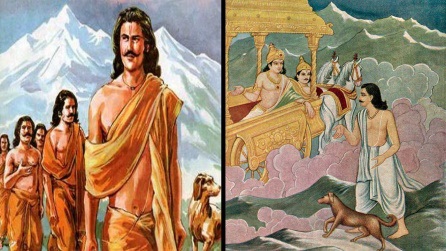 Yudhishthira was the son of Kunti Devi and was the AMSA (features) of Lord Yama Dharma. He was the eldest son among all the pandavas. After his departure from the earth, he went to heaven.

Yudhishthira was a great person who contains pure sense of mind. He always tries to win a person’s heart by making an offering to him. His wife was draupathi. Though, he was cunningly cheated by the Kauravas in the dice game, and went to the forest, he remained a noble person. He was guided by Lord Krishna with regard to ruling his country, after he won in the kurukshetra battle. He loved his mother, his brothers and his wife, and he took care of his people in a proper manner. During his regime, all the people in his kingdom were never suffered from any problems related with health, wealth and mental diseases. He provided a golden rule and he treated all the people as same and respected them well. He never considered him as a king, and acted politely to his servants and to his relatives. He never tell any lies, or acted in a wrong manner. Even nowadays also, when a person acts honestly and showed kindness to others, he will be called as “DHARMA RAJAVE”, it means even now the people are recalling King Yudhishtra, and keeping the honest person in his place.

King Yudhisthira, was well versed in art, and possessed good knowledge in vedas and other religious texts. He was also mastered in archery and a great warrior, who also fought well in the Kurukshektra along with his brothers. He always stood in the side of righteousness. He was a great personality who was remembered by the people even today. He is well known for his kindness, charity and a pleasant behaviour. Let us worship this great “DHARMA RAJA” and be blessed.