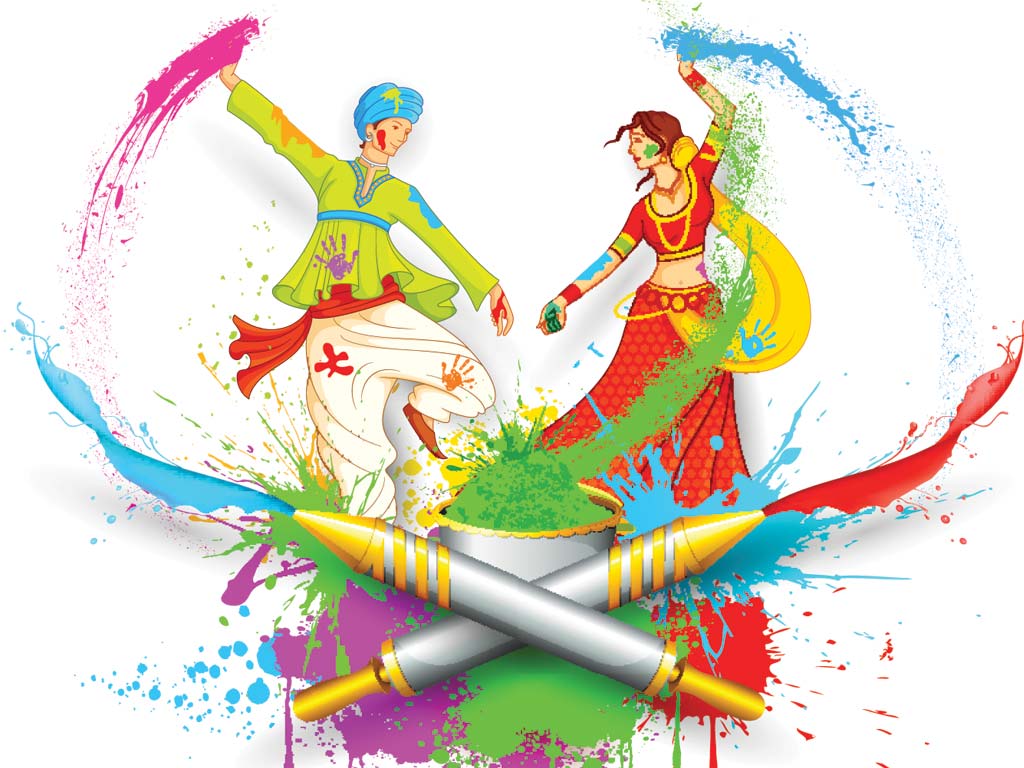 The most ‘popular’ event associated with Hoil is the burning of the demoness Holika. Infact the name ‘Holi’ is a shortened version of the name ‘Holika’. 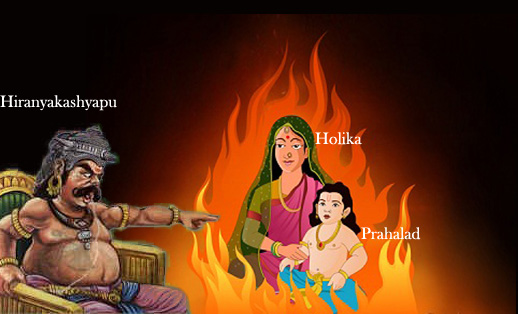 . Lord Brahma gave  a boon that he could not be killed ‘during day or night; inside the home or outside, not on earth or in the sky; neither by a man nor an animal; neither by astra nor by shastra’. He became very power ful and ordered  every one to pray him  instead of any other God . But  his own son Prahlada turned out to be a great devotee of Lord Vishnu.

Prahlada became a very great devotee of Lord Vishnu  and Prahlada refused to worship his father. So finally Hiranyakashyap tried several ways to kill his son Prahlad but Lord Vishnu saved him every time. Finally, he asked his sister, "Holika" to enter a dazzling fire with Prahlad in her lap. Holika had a boon that  she could not be effected by fire which means she can't burn in fire. Hiranyakashipu asked Holika to sit on a burning pyre  and make Prahlad sit on her lap.

King Hiranyakashyap thought his son would burn but Prahlad kept chanting Lord Vishnu's name. Prahlad was saved from fire and Holika was burnt to death. This is the story of Holika Dahan. The death of Holika and Holika's conflict signifies the triumph of good over evil. This is why Holi is celebrated next morning. The night before Holi, pyres are burnt and worshiped. 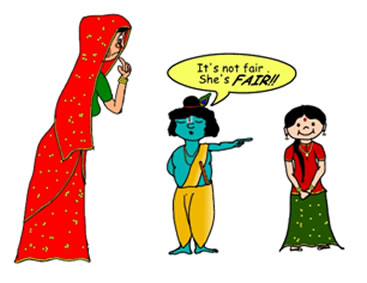 Lord  Krishna was extremely jealous of Radha's fair complexion since he himself was very dark.One day, Krishna complained to his mother Yashoda about the injustice of nature which made Radha so fair and he so dark. To stop crying of  Krishna, the mother asked him to go and colour Radha's face in whichever colour he wanted. In a mischievous mood, naughty Krishna listened the advice of mother Yashoda and applied color on Radha's face, making her one like himself.

So much so that it evolved as a tradition and a full-fledged festival. Lovers apply color on their beloveds face and express their affection for each other. 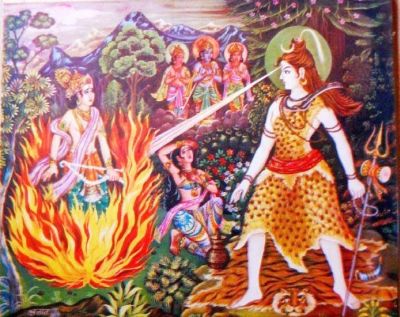 The Story has it that when Lord Shiva's wife Sati Sati invoked her yogic powers and sacrificed herself. She died but Her dead body did not burn. Lord Shiva became angry and had taken His Virabhadra Rupa. He cut the head of Daksha but finally He forgave him by reviving his life again. , The lord Shiva took the body of Sati over his shoulder and danced the rudra tandava . To prevent Lord Shiva from destroying the universe, Lord Vishnu  cut the corpse of Sati into pieces by his Sudarshana Chakra. Lord Shiva became extremely sad. He gave up his worldly duties and went into deep meditation.

Meanwhile, the daughter of the mountains, Parvati started meditating to acquire Shiva as her husband. Lord Shiva was not intrested in  world complications which made all the other Gods concerned and afraid.

The other gods then seeked the help of Lord Kamadeva, the god of love and passion to bring Shiva back to his original self. Kamadeva knew that he might have to suffer the consequences of doing this, but he accepted to shoot his arrow on Shiva for the sake of the world.Kamdeva shot his love arrow on Shiva while he was in meditation. This made Shiva extremely angry and he opened his third eye - reducing Kamdeva to ashes. However, Kamdeva arrow had the desired effect and Lord Shiva married Parvati.

Kamdeva's wife, Rati pleaded Lord Shiva and said this was all the plan of the other gods and asked him to kindly revive Kamdeva. Lord Shiva gladly accepted to do so.Thus the incident had a happy ending for all.

The Celebrations It is believed that Lord Shiva burned Kamdeva on the day of Holi.

South indian people worship Kaamadeva-the Love-god for his extreme sacrifice on the day of Holi. Kamdeva is depicted with his bow of sugar cane having the string of a line of humming bees and his arrow-shafts are topped with passion that pierce the heart.

In the kingdom of Prithu there was an ogress called Dhundhi.

Because of this Dhundhi used to trouble little children in particular.

One day, young boys of village decided to fight with her  and  throw her from their village forever. Then they got bhaang and after drinking it they started insulting Dhundhi. They followed her to the border of village, making noise, beating drums and throwing words of insult on her. They continued doing this until Dhundhi left the village. It was the very courageous work of those young boys. So, this legend of Holi also states the victory of good over evil. 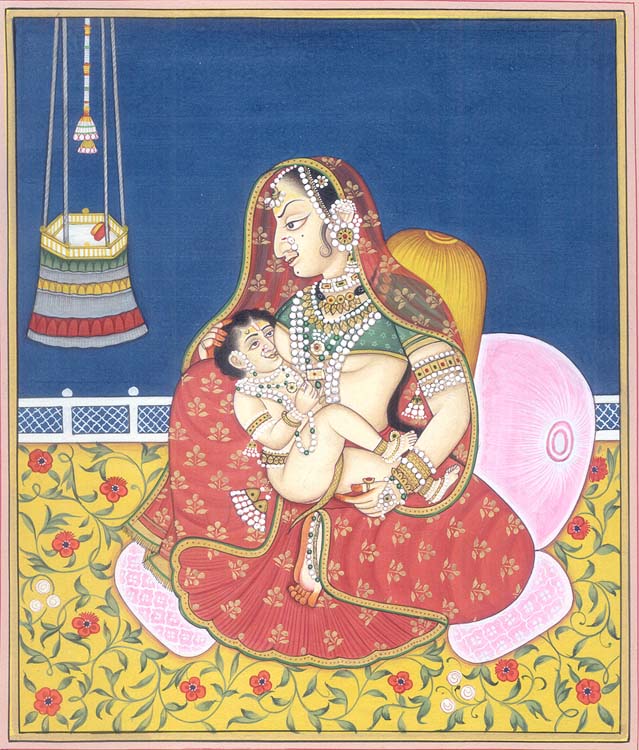 Kamsa, uncle of Krishna,one day he called putana and asked her to kill Lord Krishna . She disguised herself as a Gopikaa, and entered Krishna's house .she saw Krishna and took him for feeding. Lord  Krishna sucked her life out of her fake body and she came into her true form and then she died of pain. Yashoda and other ladies heard the loud cry of Putana ,they ran in the direction. They saw Krishna lying over the body of huge terrible demoness Putana.

On the night before Holi, there is a practice to burn an effigy of Pootana - the ogress who nearly killed baby Krishna. The tradition is symbolic of victory of god over evil forces. 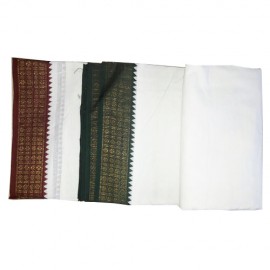