Annapurna Devi is the form of Divine Mother who grants us nourishment. “Anna” means food and grains, while the meaning of “purna” is full, complete and perfect with food and grains.

Goddesses Annapurna is the incarnation of Parvati, in essence one of the nemerous forms of shakthi. There is an intresting incident involving Lord Shiva and Goddess Annapurna, which explains that even moksha is not possible on an empty stomach.

Lord Shiva and Goddess Parvathi used to play the game of dice. Once the game became so intresting that they started betting Parvathi kept her jewels and Shiva his trident. Shiva lost the game and his trident. To get back his trident, Shiva betted serppent and this time too he lost the game. Finally, when the game ended, Shiva lost all that he ahd including his begging bowl.

A humiliated Shiva left for the Forest. Lord Vishnu approached Shiva and asked him to play again to win back all that he had lost. Taking advice from Lord Vishnu, Shiva played again and won all that he had lost in the previous game. Goddess Parvathi grew Suspicious about shiva's sudden turn of fortunes and called him a cheat. This lead to a verbal duel between the couple. Finally, Lord Vishnu intervened and revealed that the dice moved as per his wish and they were under the illusion that they were playing . Verbal duel soon turned to philosophical discssion and Lord Shiva said that possessions are temporary every thing is Maya even the food we eat is Maya.

Her disappearance caused havoc in the cosmos. Time stood still, seasons did not change, the earth became barren and there was a terrible drought. There was no food to be found in the three worlds. Gods, demons and humans kept sufferings from the hunger. “Salvation makes no sense to be an empty stomach”, cried the sages.

Seeig all the suffering, Parvathi's heart melted and she appeared at Kashi and starting distributing food. Shiva appeared before her with a begging bowl and goddess parvathi fed Lord Shiva with her own hands. Shiva said that food cannot be dismissed as mere illusion as it is required to nourish the body in which resides the Atma. Since then Goddess Parvathi is worshipped as the Goddess of Food Annapurna devi. 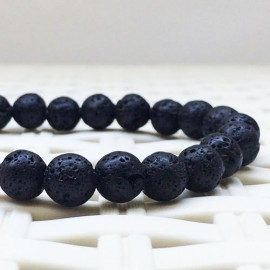 Lava Braceletit is used for calming the emotions. Note : For this bracelet pour 2 drops of essential oil on this bracelet leave it for overnight and then use it...