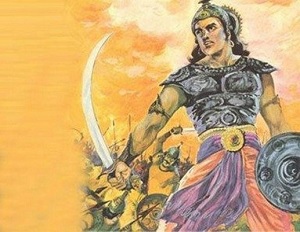 Abhimanyu was a famous character in  Mahabharata.Abhimanyu was the incarnation of Lord Chandra’s son. Abhimanyu was married to Princess Uttara. Abhimanyu was very much loved by the pandavas. At the age of sixteen, in the Kurukshethra war, Abhimanyu was killed in the battle by the kauravas. His various names are as follows:-

Abhimanyu was a great warrior, and possessed very good knowledge in all the subjects. He was a master in all kinds of art. He was a brave and a humble person, who contains all the good qualities, since he mingled with Lord Krishna, and considered him as his Guru. Being the son of Arjuna, he never afraid about anything, and was a wise man.

Abhimanyu was a great person, who respects the elders, and showed courtesy to all the people. He was a kind hearted person, and a devotee of Lord Krishna. At a younger age itself, Lord Krishna guided him properly, and taught many good things, which are essential for the life. He was a great scholar. Being an incarnation of Lord Chandra’s son, his appearance was very good. By worshipping him, we can satisfy Lord Chandra, and we can get the divine grace from him. Let us pray to this great divine warrior, and be blessed.