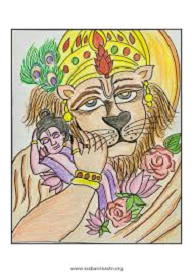 “Nahama” means offering our salutations and Bowing our head before the great almighty.