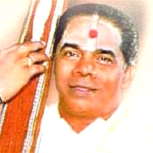 Madurai S. Somasundaram, also called as Madurai Somu (1919–1989) was a famous Carnatic music vocalist. He learnt music from famous musicians, and he started his career in the year 1934. His birth name was Paramasivam. He was the Padma Sri Awardee and also received many other awards for his rich contribution in music. He was an ardent devotee of Lord Muruga and he sang songs on him, and he used to regularly read Thirupugazh and Kanda Puranam.

Paramasivam was born in the year 1919 in Swamimalai, and his grandfather was a famous nagaswara vidwan and his family lived in Madurai. He learned martial arts, and also was interested in spirituality, and worshipped Lord Muruga from his young age onwards, and he used to visit the temples along with his mother, and in course of time, he learnt Carnatic music from the famous musician Sri. Sundaresa Bhattar. In the year 1934, Paramasivam sung some beautiful devotional songs in front of Lord Muruga at Thiruchendur. With the grace of Lord Somasundareswarar of Madurai, Paramasivam began to known as Somasundaram, and he was also fondly called by the Carnatic music lovers                 as Somu. He became very famous among the people, after he sang the “MARUTHAMALAI MAAMANIYE MURUGAIYE” in the Tamil film “Deivam”.

He died in the year 1989, and he is still remembered for his contributions in the Carnatic Music field, and for his strong faith on Lord Muruga. He is a kind hearted man, and used to provide food to the poor people, and done charitable activities at his level best. Throughout his life, he dedicated his entire attention on worshipping Lord Muruga, and through his grace, he crossed many hurdles in his life, and became a successful singer. Still now, he is remembered for his nice songs, and for his good nature.