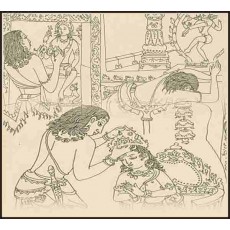 Aiyadigal Kadavarkon(6th century AD), was a ruler of Kanchipuram. He was a stauch devotee of Lord Shiva and he was considered as one among the 63 nayanar saints.

The Pallava king Aiyadigal Kadavarkon worshiped Lord Shiva with utmost faith and sincere devotion and ruled his kingdom in a well versed manner through the blessings of Lord Shiva. He protected and renovated the Hindu temples and took care of his people and invoked the spirit of Shaivism among the people. The king was a great scholar and written many songs in praise of Lord Shiva.

The king had given a golden rule during his period. People were praised him and they were free from fear and threats. There were adequate food grains stored in the godown. He also opened many dharma shalas(Choultries) throughout his region, in order to provide proper food to the poor people. In his regime, no one had suffered from poverty and ill health. In his kingdom, the entire people lived a happy life by chanting the holy shiva mantra “OM NAMAH SHIVAYA” and gave proper respects to their king “KADAVARKON”.

After sometime, he crowned his son and helped him towards administering the kingdom. After his son has become an able administrator of the kingdom, he left his kingdom and he had undergone pilgrimage to various Shiva temples, and composed divine songs on Lord Shiva. Finally he reached Thillai Nataraja Temple, Chidambaram and stayed there permanently and worshipped Lord Shiva. After his death, he merged with Lord Nataraja.

His devotional songs are known as Kshetra Tiruvenba. He is worshipped as one among the other nayanar saints in the shiva temples.

Even though he was a king, he was bored with enjoying the pleasures in the royal palace, but he was interested in spirituality and in his middle age he has become a saint and travelled to many holy shiva temples.

He had done many good services to the temples, and conducted temple rituals like doing homams, regular pujas and abhishekhams to the god and the goddess. He provided all the basic amenities to the people and lived a meaningful life.

Let us worship the great nayanar saint and be blessed.