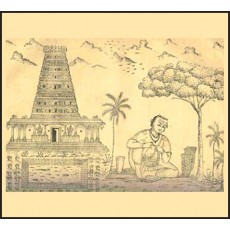 Muruga Nayanar is a great shiva devotee and considered as one among the 63 nayanar saints. He lived a saintly life and was fully devoted to Lord Shiva. He spent his entire time in doing puja to the Shiva Lingam and decorating it with flower garlands and also done various types of abhishekhams to Lord Shiva. In addition to that, he also provided food to the devotees of Lord Shiva at his home.

Muruga Nayanar was born in a Brahmin family in a village in Nagapattinam District, Tamil Nadu. He got the habit of leaving his home in the early morning and collecting various fragrant flowers for adorning it to Lord Shiva at the Thirupugalur Temple. He recited the Panchakshara mantra “OM NAMAH SHIVAYA” as a daily practice. He will used to visit the temple on a daily basis.

Muruga Nayanar maintained friendly relations with other Nayanars like Sambandar, Thirunavukkarasar and Sundarar. The great nayanar saints Sambandar and Thirunavukkarasar, were stayed for some time in his home and visited the Thirupugalur temple. He was appreciated by Sambandar due to his sincere devotion on Lord Shiva. The Tamil month Vaikasi, is celebrated as Muruga Nayanar's Guru pooja day in all the Shiva temples. He is also worshipped as a nayanar in the shiva temples.

He was a great nayanar saint who dedicated his entire life towards worshipping Lord Shiva, and also done services to the devotees of Lord Shiva. He sincerely performed puja in his home and also in the temple and performed all the rituals in the temple. He was appreciated by several nayanars for his well-known service to Lord Shiva.

Let us praise the glory of Muruga Nayanar and be blessed.