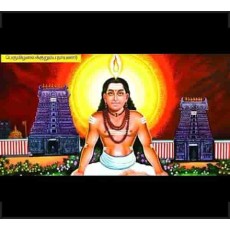 Perumizhalai Kurumba Nayanar is one of the nayanar saints in shaivism sect. His greatness is mentioned in the divine text “Thiruthondar Thogai” and described him as an ardent devotee of Lord Shiva, and also the staunch follower of the famous nayanar saint Sundarar. He is described as a pious and a humble person, who treated others with great respect and considered the devotees of Lord Shiva as similar to that of Lord Shiva. In his free time, he will used to worship Lord Shiva with flowers and performed various pujas to Lord Shiva.

Perumizhalai Kurumba Nayanar was born in Perumanallur village in Pudukottai district, Tamil Nadu and belongs to Kurumba sect. Every year, his birth day is celebrated during the tamil month of Aadi as guru Pooja in his village.

Kurumba Nayanar had worked under the ruler of the Perumizhalai region. Though he was not a rich person, Kurumba Nayanar supplied food packets to the poor people and to the devotees of Lord Shiva throughout the region. He got the habit of visiting Shiva temples in his locality at least once in a day. He lived a simple life and spent his life by worshipping Lord Shiva and chanting his shiva panchakshara mantra “OM NAMAH SHIVAYA” and also invoked the shiva bhakti spirit among the people. He was an honest, sincere and a straight forward person.

Kurumba Nayanar lived during the period of Sundarar and Kotpuli Nayanar. Kurumba Nayanar was considered as the disciple of Sundarar and given him proper respect, and learned the shaivite principles from him. Due to the divine blessing of Lord Shiva, he was mastered in all the subjects and attained great spiritual power. He was very much attached with his guru sundarar and worshipped him as equivalent to that of Lord Shiva.

He was a sincere devotee of shiva and meditated him for several days even without food. He acquired divine knowledge from Sundarar, and was well known for his charity works. He was praised by the people for his simplicity and generosity, and for his kind nature.

Let us worship the great nayanar saint and be blessed.