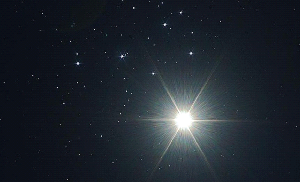 Dhruva Mandala is situated far away from the earth, but Dhruva can be seen in our normal eyes during night times. Dhruva star would brightly glitters in the skies, and would create happiness in our minds. Dhruva had reached the position of becoming a divine star in the sky, due to his sincere meditation on Lord Vishnu, and he has been shining brightly in the skies for several millions of years.

Dhruva Mandalam is the residence of Lord Dhruva, and it is situated on the top of the other divine worlds. Through his great powers, he is controlling the Rishi Mandala and also the entire planets. His powers are unlimited and he is a great devotee of Lord Vishnu similar to Bhakta Prahalada. As per legend, it is believed that he resides in the Dhruva Mandala along with his mother and his consort and he occupies the position of one of the powerful demi gods. He cannot be questioned even by Lord Indra, Yama and Varuna, since he contains more powers than that of them.

Dhruva Mandalam is present above the Saptarishi Mandalam and below the Brahma Loka, and Vaikunta. Due to the grace of Lord Vishnu, from his Loka itself, he is able to get the divine vision of Lord Vishnu.

He is considered as more powerful than the Rohini Star, consort of Lord Chandra, and he didn’t show his pride before others, and still acts as a humble devotee of Lord Vishnu. The great Rishi Narada used to frequently visit the Dhruva Mandala, and both of them would talk about the greatness of Lord Vishnu.

Since Lord Vishnu had granted immortality to Dhruva, he cannot be destroyed or cursed by anyone, and there is no end for him even during the times of the Deluge, the Maha Pralaya. Though it is not possible for us, to visit the Dhruva Mandala, at least, we can offer our sincere prayers to him, by eagerly watching him in the sky during night times.