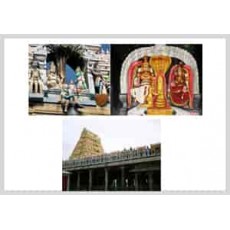 Ekambareswarar Temple is a Shiva Temple, located in Kanchipuram. It is one of the Pancha Bhoota Stalas, Prithvi.  Lord Shiva is worshiped as Prithvi lingam. Mata Parvati is worshipped as Gowridevi Amman.  The greatness of the temple was praised in the 7th century sacred work, the Tevaram, written by the great nayanars and classified as Paadal Petra Sthalam. The temple is one of the largest in India.

The temple has numerous shrines, and also contains many halls.  Ancient kings have paid more attention to this temple,  and they have introduced Puja schemes and also provided free food and housing facilities to the temple priests and the temple staffs.

The temple follows six daily rituals from 5:30 a.m. to 10 p.m., and twelve yearly festivals are celebrated in this temple.  Panguni Uthiram festival is celebrated during the period: March - April and is considered as the main festival of this temple. The temple attracts large number of tourists from all over the world.

It is believed, that Mata Parvati worshipped Lord Shiva in the form of a Prithivi Lingam in this place.

Here free food is served in the noon to a minimum of 50 persons on a daily basis.  This temple is one among the famous temples situated in Kanchipuram.  Those who suffer from prolonged illness are advised to visit this sacred temple in order to get relieved from their ailments.