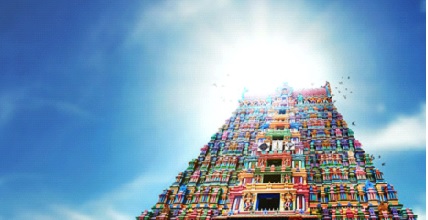 A gopuram is an entrance tower, and it is located at the entrance of the Hindu temples, and it also forms part of the temples. Kalasams would be found at the top of the gopuram.  The towering structure located towards the centre of the temple is the Vimanam. Temple gopuram is constructed as per the Vaastu shastra guide lines. Srirangam temple, Annamalaiyar temple and Srivilliputhur Andal Temple contain tallest gopurams.

By seeing the view of the gopurams, we would get pleasantness in our mind, and bhakti on the almighty would flow from our heart. The ancient kings are the blessed ones, since designing such type of big gopurams in the present period is unimaginable. Sometimes, the temple gopurams would get burned, due to some known or unknown facts. There is a famous saying in Tamil language, which means, just by having the darshan of the temple gopuram itself we would get great punya (Good Karma).

The great Shaivite Saint Pusalar, who lived in the present day Thirunindravur, during the 7th century AD, had built a temple for Lord Shiva in his mind itself, and in that mind temple, he had installed a tallest gopuram, and also performed consecration ceremony for that temple. Lord Shiva had given proper credit for his good act, and also made him as a nayanar saint, and he is still living in the Shiva Loka as the divine attendant of Lord Shiva. Even though it is very difficult for us to attain the position similar to him, but instead of thinking about unwanted things in our mind, we can start developing the habit of building the temple for Lord Shiva in our mind itself.

It is a must for the Hindus to worship the famous Hindu temples, and to have a glimpse of the gopuram, which gives lot of good results in our life. We are all the human beings, and almost daily we are suffering from some sort of mental problems in our life. In order to come out from that, we must necessarily have to visit and worship the temples, in order to get good physical and mental relaxation in our life.