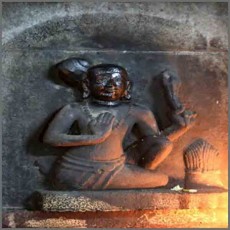 Kanampulla Nayanar is a Nayanar and he is a great devotee of Lord Shiva. He lived his life by cutting the grass and selling it in Shiva temples in order to use it as lamp wicks. Since he was the seller of the kanampul grass, he was called as Kanampulla Nayanar.

Kanampulla Nayanar was born in the family of farmers in a village, located at Nagapattinam District, Tamil Nadu. He was also a regular worshipper of Lord Shiva and frequently visits Vaitheeswaran Temple.

Through the income derived from farming activity, he lighted the lamps in Shiva temples. He will used to sing songs on Lord Shiva and would serve the god with food offering (Prasad) and provided food to the devotees of Lord Shiva at his home. Due to his continuous charity activities, very soon he had lost all of his wealth, and then he shifted to Chidambaram, and worked as a labourer by cutting and selling Kanampul grass. He purchased oil and ghee for lighting lamps in the Nataraja Shiva temple, and he also done various abhishekams to Lord Shiva with his meagre income.

After some time, due to severe drought, he found very difficult to earn income and unable to sell the grass, but he still continued serving Shiva by lighting lamps in the temple, by eating food only once in a day. Finally, he offered his own hair for burning the lamps in the temple. Due to his sincere bhakti, Lord Shiva appeared before him and granted MUKTHI.

In the Tamil month of Karthikai – Kirithigai star, he is honoured in the shiva temples and guru puja is performed.

He was a great nayanar saint who offered his own hair for burning the lamps in the shiva temples. He had done services to the god as well as to his devotees. He also spread the shaivism sect among the people.

Let us worship the great nayanar and be blessed.