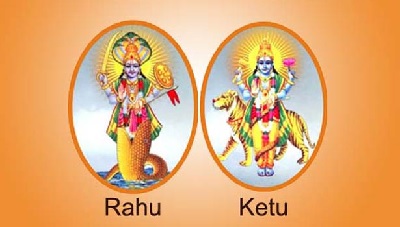 Rahu and ketu are the powerful grahas as per hinduism. Rahu and ketu both are snake deities, who are responsible for causing eclipses of the sun and the moon, and they are also considered as the supreme among serpents. Rahu and Ketu are interlinked with each other. Rahu and ketu are mentioned in the ancient puranas and in various divine texts.  Once, the gods and the demons churned the Milk Ocean to get the Amrita, the immortal drink from the ocean. Rahu was available at that time and sat along with demi gods and drank the Amrita. He was watched by the demi gods, and they informed Mohini (Female form of Lord Vishnu). However, by that time Rahu, had drunk the divine drink, and become immortal.

Lord Vishnu (in the form of mohini) got angry and removed Rahu’s head with his powerful weapon Sudarshan Chakra. Rahu’s head was separated from his body and his head was known as Rahu, and his body was known as Ketu. From then onwards, Rahu and Ketu were given the responsibility to influence the lives of the humans on Earth, based on their karmic deeds. There is a famous temple for worshiping Lord Rahu, which is situated in Thirunageswaram near Kumbakonam. There is a famous temple for Ketu at Keezhaperumpallam in Nagapattinam district. It is also situated near kumbakonam. Lot of devotees who suffer from sarpa dosha will visit the above temples and offer prayers and do pujas and perform abhishekham and archanai to them to get relieved from Sarpa dosha. Providing water and food to the animals and birds is also considered as a good human act, and will satisfy rahu and ketu and will give better results in our life, and also our bad karmas will be reduced. We can also reduce the ill effects caused by rahu and ketu by offering food to the poor and the needy, by giving clothes to the poor, providing shelters to the homeless people, and also by doing various social welfare activities.

The two snake gods, rahu and ketu contains super natural powers, and are giving the good and the bad results in our life on the basis of our good and the bad deeds. There is no need of getting afraid of them. If we worship them sincerely with utmost faith and devotion in our mind, and also by doing good activities in our life, we can reduce the bad effects of rahu and ketu to some extent. There are various mantras for rahu and ketu, and if we chant the mantras properly, they will get satisfied, and we will be well protected by them. Let us worship the great snake gods and be blessed.