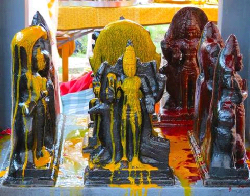 Navagrahas occupy a major part in our life. Our life is determined based on the planetary positions. By worshipping the Navagrahas and by chanting their mantras, the ill effects of the planets would get reduced, and we would get all kinds of prosperities in our life.

This mantra addresses all the nine planets of astrology namely Sun, Moon, Mars, Mercury, Jupiter, Venus, Saturn, Rahu and Ketu and seeks their blessings for the successful completion of the tasks.

Navagrahas are the demi gods, who got great powers by worshipping and performing meditation on the almighty. Our life is determined based on their influence in our birth chart. By worshipping the Navagrahas and by chanting their mantras, our sins would get reduced, and we would get all kinds of prosperities in our life.

‘Om’ is an eternal, universal sound, the Brahman and it denotes the supreme spirit, also called as the almighty.

‘Navagrahas’: Praising the Navagrahas and seeks their blessings to lead a peaceful and trouble free life.

‘Namaha’ means offering our humble prayers to the almighty, and bowing our head before him.