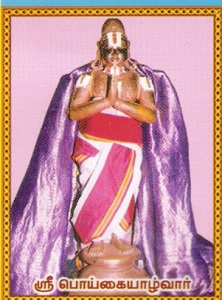 Poigai Alvar(4203 BC) is one of the twelve alvars of South India. Poigai Alvar composed Muthal Tiruvandadhi in praise of Lord Vishnu.

As per ancient epics, Poigai alvar was found in a small pond near the Yadhotakaari temple at Kanchipuram. Since he was found in a pond, he is known as Poigai alvar. Annual birth day celebration takes place in Yadhotakaari Tempe for Poigai Alvar. At a younger age, he learnt the basics of Vaishnavism, and was an expert in composing poems.

From childhood, Poigai Alvar was a sincere devotee of Lord Vishnu. He spread the Vaishnavite tradition among the people by singing the glory of Lord Vishnu. At the Yathothkari Perumal Temple, there is a shrine dedicated to poigai alvar. Poigai alvar was a great devotee of Lord Vishnu, and he was the source of inspiration for other vaishnavites. He was a great knowledgeable person, and a kind hearted saint, who took care of his devotees in a proper manner. He will sing in praise of god, and tries to find the solutions for the sufferings of the common man. He solved the problems in the life of his devotees, by advocating them to the spiritual path. His name and fame was spread among the masses through his bhakti cult.

Poigai alvar who lived in the previous dwapara yuga, was a great saint, and who was appeared in this world, for the purpose of spreading the Vishnu bhakti among the people, and for reducing the sufferings of the people of “KALI YUGA”. He was born in last yuga, mainly to bring forward the people in a bhakti spirit, so that the miseries and sorrows of the people at this “KALI YUGA” will be removed from their life. Let us worship this great alvar and chant his name for ever and be blessed.