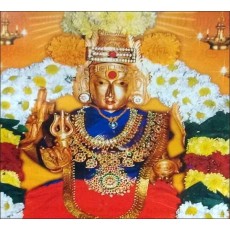 Arulmigu Pidari Ilankaliamman temple is situated in Saidapet, Near Saidapet Bus Depot. The chief deity of the temple is Ma Ilankali, and she is considered to be a guardian deity. Apart from the main shrines, there are shrines for Vinayagar, Anjaneyar, Murugar and his consorts, Ma Valli, Ma Devasena, and the Navagrahas.

According to legend, long back ago, there were several demons and ghosts who were residing in this area, and they gave lot of troubles to the people who resided nearby this area. They used to even kill some of the people, in order to eat them, and they have done this activity regularly. The depressed people reported the matter to the then king of Saidapet, and after the king prayed to Ma Shakti Devi, on one night, in his dream, Ma Shakti Devi had appeared in the form of Kali Devi, and ordered him to construct a temple for her. The next day morning, the king informed about his dream to all the people in his kingdom, by playing drums, and within a few months, a nice temple for Ma Kali Devi was built by the king, and hence forth, the temple came to be known as Arulmigu Pidari Ilankaliamman Temple. Kali Devi also killed all the demons and the ghosts and removed the worries of the king and his people.

This nice temple is situated in the famous area Saidapet, at Chennai, which is considered to be a very costly area of Chennai.

During Tuesdays, Fridays and Sundays, Special pujas are being done to the holy mother Kali Devi, and we can see her sparkling smiling face by adorning golden ornaments and rich garments. Aadi month celebrations would be done grandly at this temple, and Kuzh offering would be usually arranged by a group of devotees, in order to quench the thirst of the tired pilgrims who visit this temple.

Mr Prabhu - 9841630999 may be contacted for knowing further details about the temple.

There is also a famous temple for Ma Kali Devi, and the name of the temple is Arulmigu Mangaliamman Temple, and it is situated in Aminjikarai, Chennai.