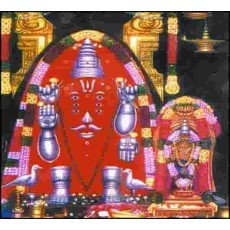 There is an ancient and famous temple dedicated to Lord Saneeswara Bhagawan at Kuchanoor. Here the Lord can be seen in swayambhu (self-emanated) form. In front of this temple, the holy river Surabi flows. Different religious people like Hindu, Muslim worship in Kuchanur and get the blessings from the Lord Shani Devar. There is a separate temple for guru, and it faces in the north direction, hence this temple is also known as vadaguru temple. This temple is the most popular temple, in South India. In this temple, Lord Shani Bhagavan appears in a gentle manner, without angry mood, and whoever comes to this temple, would be blessed by Lord Shani Dev. People would eagerly visit this temple, in order to get rid from their sins and diseases.

It is also believed that at the present place of the temple, as per the advice given by Lord Krishna, Pandavas had worshipped Lord Shani Bhagavan and they had got relieved from their doshams.

During British rule, some British people were badly commented about Lord Shani Dev, and as a result, they had suffered from paralysis. Soon they realized about the significance of Lord Shani Dev, and they begin to worship Lord Shani Dev in a sincere manner and due to that, all of their diseases were vanished from their body. There is a hanuman temple and Lord Panchamukha ganapathi’s idol is also found. There is sufficient water in the Holy River Surubi throughout the year. It is also considered as an important temple for Lord Shani similar to Thirunallaru temple and Shani Singnapur. Apart from the temple lodging facilities, lot of private boarding and lodging houses are also available nearby the temple, and we can utilize the facility. Devotees are requested to visit this great Lord during Saturdays, in order to get the full grace of Lord Shaneeswara.