Story of Gajasura : Gajasura is the great devotee of Lord Shiva who did sever penance for many years to receive special boons. Lord Shiva pleased with Gajasura penance and offered a boon. Gajasura asked Lord Shiva to reside in his belly, and Shiva agreed.

Meanwhile Goddess Parvathi, was anxious to know the whereabouts of her husband and finally approached Lord Vishnu for help. Vishnu disguised himself in the form of a street player along with Nandi (Vechile of Lord Shiva), went to Gajasura's kingdom in search of Lord Shiva, Nandi performed a dance to please the demon. Gajasura impressed with the performance of Nandi and asked the street player (Lord Vishnu) to ask a wish, the street player asked Gajasura to let Shiva out of his stomach.

Gajasura came to know that the street player is Lord Vishnu and inreturn Gajasura prayed to Lord Vishnu and said that he would be allowed to be immortal in the memories of people.

Why does Lord Ganesha have an Elephant head ?

Goddess Parvathi cames to know about the Vishnu's victory she felt very happy. Lord Ganesha was crafted by Goddess parvathi from the sandalwood paste, which is used for bathing.

Goddess parvati, went to take bath and instructed Ganesha to guard the door. As advised, Ganesha guarded the door, Lord Shiva, who had gone out returned and as Ganesha didn't know him, didn't allow him to enter. Lord Ganesha refused as he was not aware who was Lord Shiva. Various other Gods requested Ganesha to allow Lord Shiva, but Ganesha denied. This resulted in battle between Lord Shiva and Ganesh, angry Shiva severed the head of the child. Goddess Parvathi seeing this became enraged, seeing parvathi in anger Shiva promised that her son will be alive again.

Lord Shiva ordered his Gana's to fetch the head of any sleeping being who was facing the North. The Ganas found a sleeping elephant and brought back its severed head, which was then attached to the body of the boy. 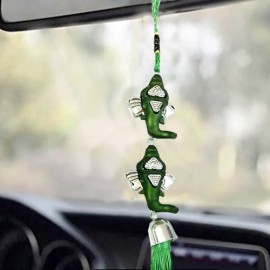