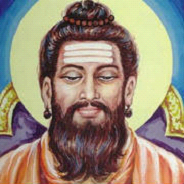 Nijaguna Shivayogi (15th century AD) was a great saint and a devotional writer in the Kannada language. He was a follower of Lord Shiva, and he was the ruler of a small region in Mysore. His famous text Vivekachintamani, was written in a simple style and it was stolen the hearts of thousands of readers during his period.

The holy text Vivekachintamani, contains astronomy, medicine and spirituality. He also wrote texts in praise of the great Shaivite saints, and he was highly appreciated for his notable works. His other works include:

Though he was a ruler of the kingdom, he lived a simple life, and spent most of his wealth for feeding the Shiva devotees.  Similar to the Nayanar Saints, his Shiva Bhakti was very strong, and he had done lot of good activities like renovation of ancient Shiva temples, conducting Shiva pujas and taking care of the families of the Shiva Priests etc.

His famous quotes are as under:

⦁ Feel yourself filled with Shiva, and realize him through your heart, and keep chanting his glories.

⦁ In the future periods, lot of bad things may occur in this world. In order to prevent such things, pray to Lord Shiva to protect the entire world from destruction.

⦁ Consider that Shiva Bhakti is the permanent wealth, and try to develop strong faith on Lord Shiva, in order to attain MUKTI.

⦁ Living a life like an animal would not fetch anything for us. Do good things in your life, so that during your old age, you can recollect the past good deeds done by you, in order to get mental peacefulness.

⦁ Our life’s aim is to attain the glory of the god. For that, develop spirituality in your mind, and lead a simple and honest life.