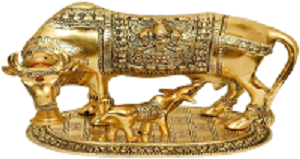 Nandini is the holy cow, and she is the daughter of the divine cow “KAMADHENU”. She was mentioned in ancient Vedas and Upanishads and she was highly praised for granting all types of necessary things in our life. During the Treta Yuga, she was owned by Rishi Vashista, and she gave milk to him for doing Abhishekham to the Shivalingam, and she also grants all types of necessary things needed for doing Yagna and other rituals to the holy Rishi.

Once she was abducted by the divine Vasus from the Ashram of Vashista, and due to that, Rishi Vashista had cursed them to take birth in the earth, and to be born as the sons of Santhanu and Ganga. Afterwards, Vashista took back the divine cow to his ashram, and several years later, the divine cow Nandini went to the Indra Lok, along with her mother Kamadhenu.

She is also called as Surabhi, which means the wish fulfiller. At present it is believed that she lives in the Goloka along with Mata Kamadhenu and continuously chants the names, and praises the glory of Lord Krishna.

Let us worship the divine cow and be blessed.