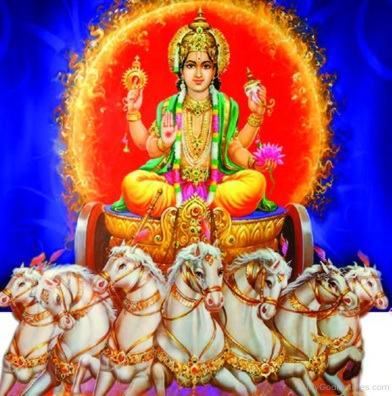 Surya  is the sun god, and he is called by various names such as  Aditya,  Bhanu,Ravi, and Marthanda. He was the son of Kashyapa and Aditi.

Surya has been worshipped since ancient periods. His worship is mentioned in vedas, uphanishads,puranas and also in other ancient texts. His worship is mainly found in northern parts of India in states such as Gujarat, Bihar, Maharashtra, Uttar Pradesh and Odisha. Major festivals related to Lord Surya include Makar Sankranti,  Ratha Sapthami and Kumbh Mela. Surya is residing at Suryaloka along with his two wives Saranyu and Chaya Devi. His children are Yama,Yamuna, Ashwin Kumaras and Lord Shani Dev. He is travelling in his chariot driven by seven horses, and his charioteer name is Aruna. Surya is giving lot of benefit to the entire universe. Without his light, nothing can be done in this world. He is needed for giving light during the day time and also for growing up of agricultural crops, for giving rain and many more. Doing Surya Namaskaram is very good one, especially for people suffering from poor health, such as suffering from skin diseases, leprosy and mental illness. Lord Surya also gives us several benefits through his sun light, mainly by protecting us from skin related diseases. He is treated and worshipped as Lord Vishnu widely all over India. He is also called as “SURYA NARAYANAN”, the one who protects the entire universe. Lord Surya also is considered as the Guru of Lord Hanuman. Surgriva and Karna were considered as his sons. He occupies an important place in Hinduism, and is one of the nine navagrahas (Planets). Famous Temples 1. Arasavalli sun god temple, Andhra Pradesh 2. The konark sun temple, Odisha 3. Suryanar Kovil, Kumbakonam,Tamilnadu 4. Sun Temple, Ranchi,Jharkhand 5. Sun Temple,Assam 6. Sun Temple in Jammu and Kashmir 7. Sun Temple, Gwalior,Madhya Pradesh

For explaining the importance of sun god in detail, we have to publish a separate book itself. He contains such as lot of valuable features within him. We should take at least a few minutes time in the early morning, and worship him sincerely, so that we can do our duties properly, and without much difficulty. We have keep it in our mind that, daily he is doing his duty without taking any rest, and we also have to follow it by worshipping him sincerely and faithfully, and can get his divine blessings.