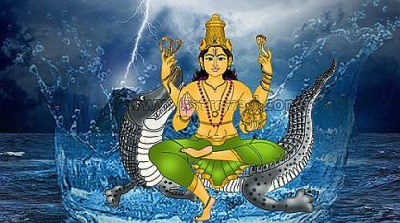 Varuna is a Hindu deity related with the seas. He is found in the Vedic literature of Hinduism. He is the god of sea and rain. He is under the control of Lord Indra. He receives the instructions given by Lord Indra, and will do according to his favour. In the Hindu Puranas, Varuna is the god of oceans,and his vehicle is a Makara(Sea creature),  and his weapon is a rope loop. He is regarded as the guardian deity of the western direction. He is also regarded as the father of the great sage Vasishta.

According to  Rigveda, Varuna is considered as the protector of moral law. He is mentioned in many epics, and was praised by holy sages for his superior powers. In Yajurveda, Varuna is said to be an AMSA of Lord Vishnu, it means Varuna contains the feature of Lord Vishnu. He is also considered as the main deity of physicians. His importance is mentioned in detail in various Upanishads.   In Ramayana,Lord Rama tried to cross the sea for going to  Lanka, in search of his wife sita. For crossing the ocean, he sought the help of Lord Varuna. But Varuna doesn’t respond to his prayers and kept silent. Rama got angry with him and tried to punish him through his arrows. After that, Lord Varuna responded and promised Lord Rama, that he will help him for crossing the ocean, and further promised him, that the bridge will not get sink into the water.

Varuna is a great god, and is the giver of rain. In hindu temples, Varuna homam will be conducted in order to get the required rain during the rainy season. Lord Varuna is also prayed for getting relieved from water related diseases like common cold, diabetes,illness caused towards consuming bad water, and also cures all other types of dreaded diseases also. But the main thing is, we have to worship him with pure devotion in our mind with full concentration on him, and by chanting his name for several thousands of times. Let us pray to Lord Varuna and be blessed. Let us chant his name, and live peacefully for ever.