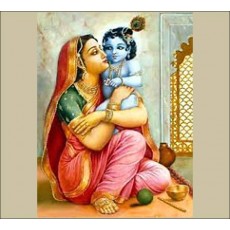 Yashoda is the foster-mother of Lord Krishna and the wife of Nandagopal. She is mentioned in ancient Hindu texts. According to Bhagavata Purana, Krishna was born to Devaki, but he was    brought by his father Vasudeva to Gokulam, due to the evil act of Kamsa, and raised by Yashoda and Nandagopal.

Yashoda is a kind hearted woman who has brought up Lord Krishna in a good manner. She also treated her neighbour’s children as her own children, and showed love and affection on each and every one. She got the opportunity to see the childhood plays and miracles of Lord Krishna, and got mesmerised through his playful acts.   Yashoda has done many good karmic deeds in her previous births, and hence she got Krishna as her lovely son. She also praised for her great love and affection she had with Lord Krishna. Yasoda also played an important role in raising Balarama (the son of Rohini) and sister Subhadra. She also gave birth to Yoga Maya, but when Kamsa tried to kill Yogamaya, she assumed her real form and stayed in Vindhya hills as Vindhyavasini Devi.  She has taken birth as Vakula Devi, the foster mother of Lord Venkateswara in this Kali Yuga.

The following are the some of the Thalattu song of Ma Yashoda on Lord Krishna, which would be sung by her in order to make Child Krishna to sleep properly during night times.

Oh My Dear Krishna, sleep well, sleep comfortably on my lap. The weather is good, and my affectionate arms are gently rubbing your body, you have eaten enough butter, now it is the time for you to sleep well!

Oh My Dear Krishna, even during the time of sleep, your face doesn’t appear dull, but it looks brighter similar to the full moon. Even if you touch the ordinary water on your tender hands, very soon, it would become the divine nectar. The sound of the breath which you release from your nose is like hearing the Gandharva Gana, and even if you drink the poison, it would not harm you, since you are taking rest in the Divine serpent bed Adisesha.

My Kannan would do Leelas, my Kannan would be miracles, Kannan also called as Balagopalan is my precious child. He would dwell in the lap of the Yadava mothers. He used to show all the divine worlds on his mouth.

My Child Krishna is the one, who has created the 14 worlds, and he is able to lift all the worlds on his little arms, I don’t know what kind of meditation I have done in my past births, in order to have such a lovely child Krishna as my son?

My child Krishna is the one, who contains superior powers than that of Brahma and Indra, but I am able to tie Krishna to the grinding stone, since he is keep on doing lot of mischievous acts again and again. I am doing this act, not to punish him, but I am doing it, out of my own love and affection, in order to make him to restrict his playful acts, since he always gives pleasant troubles to others.

My Child Krishna is worshipped even by the great sages like Sanaka, and with his gentle smile, he steals the hearts of everyone, and I have been very much blessed to grow up my beloved child Krishna under my lap.

My Child Krishna would release his devotees from the repeated chain of birth cycles. Those who worship him sincerely need not worry about their life, since they have been well-protected by my wonderful child Krishna.

My Child Krishna is the child not only for me, but for the entire mothers in the world. He brings happiness to those who suffer from worries, provides food for the hunger, removes the sins of the sinners, and shows the proper path in the lives of his devotees. He is called by various names such as Kanna, Gopala, Kesava, Mukunta, Achuta and Ananda.

My Child Krishna does not harm anyone, but he would give a soothing effect to the pains of the devotees, kill their bad habits, and make them to lead a disciplined life. Being his mother, his divine qualities cannot be praised fully even by me, since he is beyond our imagination.