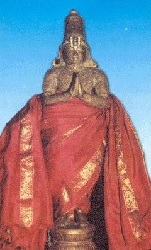 Madhurakavi Alvar (3224 BC) is one of the twelve alvars  of South India. He was the disciple of Nammalvar. Through his devotional works, he has spread the importance of Vaishnavism among the people. The songs of Mathurakavi alvar are chanted during festive occasions in most of the Vishnu temples in South India.

Madhurakavi alvar was born in a Brahmin family, in Thirukolur, Tamilnadu.  He is believed to be the incarnation of lord garuda(Divine vehicle of Lord Vishnu). Madhurakavi alvar was well-versed in vedas, and composed poems in praise of Lord Vishnu. He travelled to the divya desam temples located in northern India. DEVOTIONAL WORKS The poems of Madhurakavi alvar are classified as Kanninum Chiruthambu, in praise of his divine teacher, Nammalvar. Mathurakavi alvar was the key person in spreading the divine works of Nammazhwar. Mathurakavi Alvar has compiled the poems known as Thiruvaymozhi, which was written by Nammalvar. Madhurakavi Alvar composed many poems, and added them to Nalayira Divya Prabandham (A collection of divine poems in praise of Lord Vishnu). IMPORTANCE Madurakavi Alvar was a great saint, and also sincerely devoted to his guru nammalvar, and to Lord Vishnu. He has taken greater interest in spreading the name and fame of his guru nammalvar among the masses. He has also acted as a guide to the people, and he made them to realize the bhakti spirit, and invoked it into them. He was a great spiritual leader who lived a simple life, and concentrated his entire attention towards devotion to god.

Madurakavi alvar was a disciple of nammalvar, and acted as an example to others, for his great guru bhakti on nammalvar. He was a pious and a kind hearted saint, who never allowed unnecessary thoughts into his mind, but his mind was filled with full of spiritual energy, and he attained the eternal bliss at the abode of Lord Vishnu. Let us pray to him and be blessed.