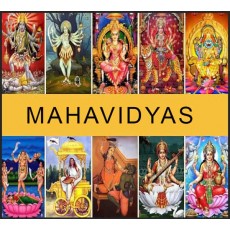 After the introduction of the Mahavidya worship, Shaktism had gained popularity. People began to worship Ma Shakti Devi in various forms, and all the females deities are considered as an aspect of Ma Shakti Devi. Shakti Devotees began to perform puja to the Mahavidyas, and in various texts of Hinduism, especially in the Devi Bhagavata Purana, the entire details about Mahavidyas, and their significance were mentioned.

All the Mahavidyas were created from the powers of Ma Shakti Devi, and their main purpose of creation is to protect the universe and to maintain peace and prosperity in the world. All the ten forms of the Goddess are worshiped as the universal Mother goddesses, and they are also worshipped in the form of Shri Chakra. Lot of temples are dedicated to the Mahavidyas throughout India. Ma Parvati is the supreme deity in Hinduism. And she is called by various names and worshipped in different forms in temples.

Though she has transformed into various forms, worshipping her in the name of Shakti Devi, Durga Devi or Parvati Devi is commonly practised by the devotees. At the present situation of the world, she is the best protector and she only removes our fear, diseases and from all sorts of problems in our lives. We can worship the Mahavidyas, by placing their picture in our home. Instead of chanting each and every name of the Mahavidyas, even if we chant the single mantra, “OM SRI DURGA DEVI NAMAHA”, that itself is enough to please the Mahavidyas, since they are the divine forms of Devi Durga.