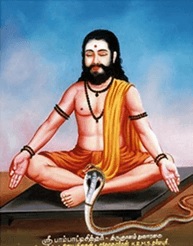 Pambatti siddhar was one among the 18 siddhars  who lived in various parts of India. Some of his poems are still available. Even his poems are addressed to snakes. He was the disciple of the great sattaimuni siddhar.

Once the great Sattaimuni Siddhar met a snake charmer, and explained him about Kundalini Shakthi, and initiated him into the path of spirituality. The snake charmer, who has mastered the control of Kundalini, attained great powers. From then onwards, he was called as Pambatti Siddhar.

Sri Pambatti siddhar has attained 'ASHTAMASIDDHI' through meditation at a cave, near Coimbatore in Tamil Nadu. He also lived in places like Mahalingamalai and Kollimalai. He has asked the people to love each other, and not to fight with others, and he further stated that salvation is not possible without loving each other, and giving respect to others. He also meditated in Marudamalai by praying to Lord Murugan. He is believed to have attained Samadhi  in Sankaran koil.  He has lived a full life span of 123 Years. Pambatti Siddhar was an expert in Siddha Medicine and Yoga. Finally, he attained Jeeva Samathi at Sankarankoil in Tirunelveli District of Tamil Nadu.

Pambatti Siddhar is a great siddhar, and contains spiritual qualities, and guided the people towards attaining SALVATION through meditation and devotion to god. He insisted the people to show kindness to others. Let us worship this great Siddhar and be blessed.