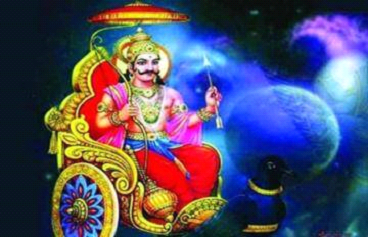 Shani refers to the planet Saturn, and he is also classified as one among the Nine planets, also called as Navagrahas. Shani is considered as a judgement god, and his greatness is mentioned in the Puranas, and he used to give correct judgement to the human beings as per their karmic deeds. He is the son of Lord Surya and Ma Chaya, and his consorts are Neelima and Manda, and his sons were Gulika and Kuligna. He resides in the Shani Mandalam, which is very bigger than the size of the earth, and he discharges his duties in an excellent manner.

Lord Narada had visited the Shani Mandalam, and explains it in a nice manner, “Among the various planets, Shani Mandalam is considered as a beautiful place, and in this Loka, Lord Shanidev is living along with his consorts and with his children in a beautiful palace. This Loka would be visited by the holy sages and also would be visited by Lord Chandra and Indra, and by other divine demi gods”.

Lord Shani is the supreme deity, and he gives positive and negative results, as per our daily activities and also according to our Karma. Those who sincerely worship him need not suffer from big problems in their life, and the blessings of Lord Shani Dev would always be there for them.

Shani Mandalam is situated far away from the earth, and it is not easy to visit this place by the astronauts, since it is very difficult for them to reach that place. In general, god would not disclose his abode, and it is not possible for us to meet him in his place.

Even though, space researchers are trying hard to find ways to reach the Saturn quickly, but in general, even if they send space crafts to Saturn, it will take at least a period of few years to reach that place.

Though it is not possible for us to visit Shani Mandalam, at least we can visit that loka in our dreams, and can enjoy having in the Company of the great Lord Shani Bhagavan, and with his consorts and his children.