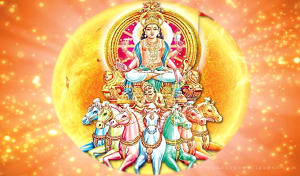 Lord Surya resides in the Surya Mandala also called as Surya Loka, and he is called by various names such as Aditya, Bhaskara and Ravi. Surya worship is popular in North India, and most of the North Indian women belonging to Hinduism would perform special puja to Lord Surya during sundays. Lord Surya is the son of Rishi Kashyapa and Mata Aditi, and his consorts are Sharanyu and Chaya. He is the father of Lord Yama, Yamuna and Lord Shani Dev. He is also the guru of Lord Hanuman. He is an ancient god, and he is most popularly worshipped in ancient period, and his worship was slowly declined due to the increase in the popularity of gods like Vinayaka, Shiva and Vishnu. Surya Mandalam is situated far away from the earth, and normal people cannot think about going to that Loka, since Surya generates lot of heat, and it is highly impossible to visit that world, and even if we try using modern techniques, before reaching the abode of Lord Surya, we would be burnt into ashes. Surya Mandala is also bigger in size similar to the other planets, and it contains all the richness and comforts similar to the Swarka Loka. In the Surya Loka, there are separate palaces for his consorts, and for his servants. While Lord Hanuman was a child, he thought Lord Surya as a big fruit and tried to catch him. Being the divine avatar of Lord Shiva, he was able to reach his abode. Surya Loka was also visited by sages and saints, and they used to praise him and sing songs on him. Lord Narada while he was wandering to various places, he visited Surya Loka also. As per legend, Surya Mandala was created by the divine architect Lord Vishwakarma, and he is the father-in-law of Lord Surya. He has beautifully designed the Loka, and made it to appear similar to the other divine worlds. Lord Surya is also worshipped by Lord Rama and Krishna, and Lord Rama had got great powers after he chanted the Surya Stotra. Though it is not possible for us to visit the Surya Mandala, at least we can imagine in our mind about the Surya Loka, and about its wonderful features.