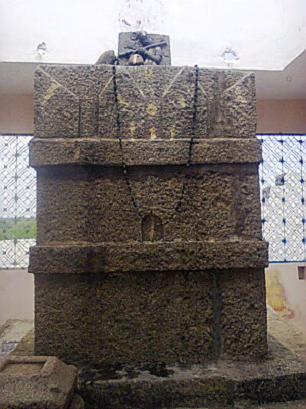 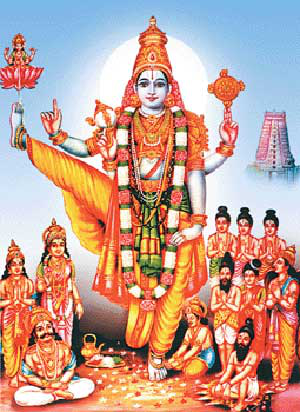 INTRODUCTION : Ulagalantha Perumal Temple also known as Trivikrama Temple is a   temple dedicated to Lord Vishnu located in Tirukovilur, Tamil Nadu. It was constructed with great architectural skills, and the importance of this temple is mentioned in the Divya Prabandham. It is one of the 108 Divyadesam, and Lord Vishnu is worshiped as Ulagalantha Perumal and his consort Mata Lakshmi as Poongothai. The temple is constructed by Chola Kings, and later renovated by Vijayanagar and Madurai Kings. The temple is considered as one of the biggest temple in tamil nadu.As per ancient lege..
Read More
Melmaruvathur Temple
Posted on 11.03.2020 | Updated on 11.03.2020 | Added in Devotional , God Stories, Temples Info | 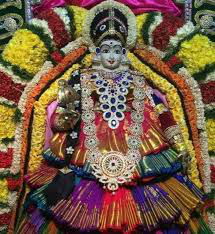 INTRODUCTION : Arulmigu Adhiparasakthi Temple is situated at Melmaruvathur, Tamilnadu. In the Melmaruvathur Adiparashakti Siddhar Peetam, the divine mother Adhi para sakthi had given great spiritual powers to Sri Arulthiru Bangaru Adigalar, and through that lot of welfare activities are taking place at this temple.In 1966, people began to worship the Swayambu (self-emanated) form of Adhi Parasakthi, and built a small hut in order to cover the Swayambu Amman and conducted regular Pujas to it.This place is known as Siddhar Peetam. In the year 1977, the idol of Mother Adhi para sakthi was in..
Read More
Sankarankovil
Posted on 22.01.2020 | Updated on 22.01.2020 | Added in Devotional , God Stories, Temples Info | 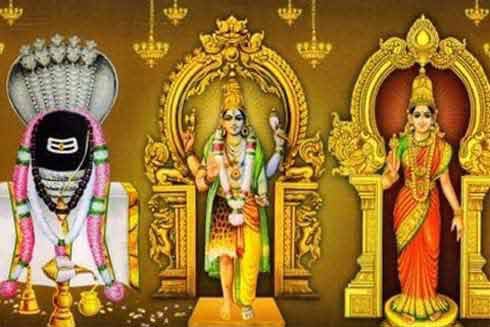 INTRODUCTION: Sankarankovil is a place where the famous Sankara Narayanan temple is located. In order to make the devotees of Vishnu and Shiva to realize that both of these gods are one and the same, Lord Shiva and Vishnu were appeared in this place as Sankaranarayanar.It was built by the great Pandiyan king Sri Ukkira Pandiyan during the 9th century AD. The main deity of the temple is Swamy Sankara Narayanan, consisting of the appearance of both Vishnu and Shiva.The deities found in the temple are Sri Sankareswarar, Sri Gomathi Amman and Sri Sankara Narayanar.The holy sand of this temple..
Read More
Pallikondeswara Temple
Posted on 22.01.2020 | Added in Devotional , Temples Info | 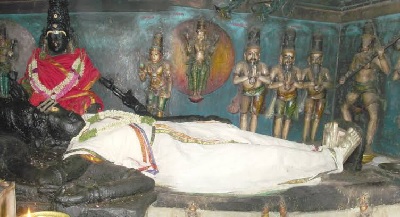 INTRODUCTIONPallikondeswara Temple is a famous temple dedicated to Lord Shiva and it is situated in Surutapalli, a village in Chittoor district of Andhra Pradesh. The main deity Pallikondeswara, unlike in other Siva Temples, will be in the form of resting posture, and such a kind of form is not found anywhere else.Palli Kondeswarar is found along with Mata Parvati who is called as Sarva Mangalambika, who gives all kinds of prosperity to us. The temple was built by the Vijayanagara kings. Here Lord Shiva is not worshipped in the form of Lingam. The divine idols of Ganesha, Muruga, Surya, Chandr..
Read More
NAVAGRAHA TEMPLES AT KUMBAKONAM
Posted on 21.01.2020 | Added in Devotional , Temples Info, Navagrahalu | 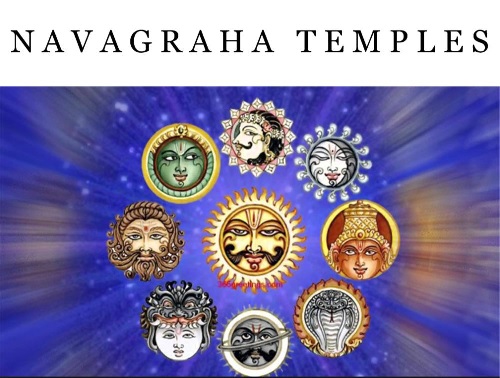 INTRODUCTION :Navagrahas are occupying the main place in our life. We are able to live in this world, through their grace only. Apart from the main gods, Navagrahas are considered as demi gods, and are even worshiped by the great rishis, sages and saints. In order to get prosperity and to get rid from our problems, it is advisable to visit and worship the nine temples, also called as Navagraha temples, situated nearby the Kumbakonam area. The details of the nine temples are as follows:1. Suriyanar KoilTemple HistoryThe temple is believed to be the place where all Navagrahas also called as Nine..
Read More
Kavindra Tirtha
Posted on 21.01.2020 | Added in Devotional , God Stories, Temples Info | 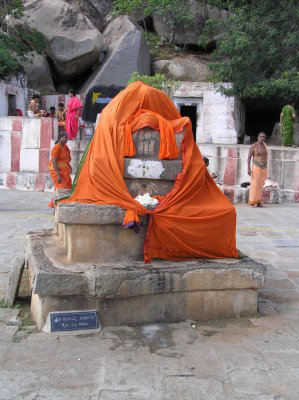 INTRODUCTION :Kavindra Tirtha (1333-1398) was a dvaita saint and the pontiff of Uttaradi Mutt. He was a great scholar and talented in all vedas, shastras, Upanishads and other holy texts. He was the chief of the Uttaradi mutt during his last six years, before attaining Samadhi in the Nava Brindavan, which is situated in Hampi, Anegunde,     karnataka. Devotees from all sects of Hinduism would visit this holy place, and worship the great Saint Kavindra Tirtha along with the eight other saints.The nine saint names are as follows:1. Shri Padmanabha Tirtha2. Shri Kavindra Tirtha3. S..
Read More
Gangamma Devi
Posted on 21.01.2020 | Added in Devotional , Temples Info | 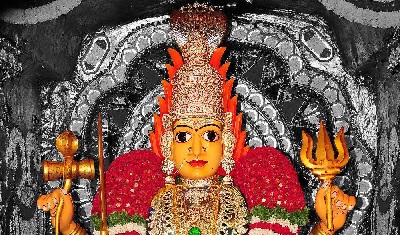 INTRODUCTION :Gangamma Devi Temple is situated at Boyakonda, Andhra Pradesh 517257. This is a holy temple dedicated to Mata Gangamma Devi, who is considered as an incarnation of Mata Parvati Devi.Hundreds of years ago, the tribal community people known as Boyas were lived in the forest located near the hills. They were against the rule of the Sultan kings and started fighting with them. But they couldn’t withstand the army of the Sultan and escaped into the forest and prayed to the holy mother to save them. Due to the divine grace of Gangamma, the nawab’s army were fled away from that place. I..
Read More
Artha Nareeswarar Temple
Posted on 21.01.2020 | Updated on 21.01.2020 | Added in Devotional , Temples Info | 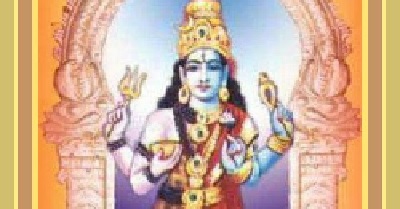 INTRODUCTION :Artha Nareeswarar temple in vasudevanallur at Tirunelveli District is a famous temple, and it is several centuries old temple. The main deity of the temple is Lord Arthanareeswara also called as Chinathamaninathar, and the name of Devi is Idapaga Valli. There are also other shrines for Lord Nataraja, Bairava and Chandikeswara. Apart from these shrines, the following shrines are also found in this temple:1. Lord Surya2. Dakshinamurthy3. Juradevar4. Veerabadra5. Mahalakshmi6. Dharma Sastha7. Lord Vinayaka8. Sani Bhagavan9. Nagaraja and his consort NagaraniThe temple timing is: From..
Read More
Famous Temples in India
Posted on 11.01.2020 | Updated on 11.01.2020 | Added in Temples Info | 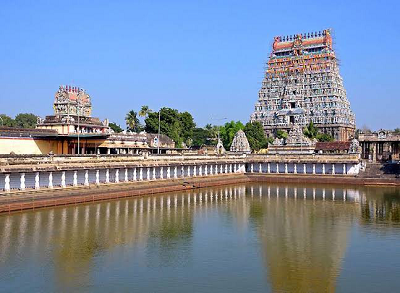 1. The Gomateshwara is situated at Shravanabelagola in the Hassan district of Karnataka. The 60 feet gigantic statue of Bahubali is situated in Vindyagiri Hill at Shravanabelagola. Lord Gomateshwara temple is one of the largest temples in the state.2. The Dilwara Jain Temples is situated at the holy hill station of Rajasthan,Mount Abu. Dilwara Temples is one of the most beautiful pilgrimage sites of the Jains in India. Jain Temples at Mount Abu is built by marble and considered as one of the finest monuments of India.3. The Ranakpur Jain Temple is located in the Pali district of Rajasthan, bet..
Read More
Showing 41 to 50 of 59 (6 Pages)
SIGN UP FOR OUR NEWSLETTER
Get our updates on new arrivals and discount