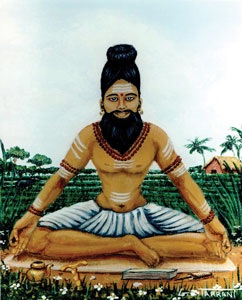 Tirumular was a Tamil  Saint, and considered as one of the sixty-three Nayanmars and also one of the 18 Siddhars. Sundaranathar was his original name. And he belonged to Madurai in Tamil nadu. According to the views of great scholars, he is believed to have taken birth during 8th century AD. And his main work, the Tirumantiram was well accepted by the tamil people.

He travelled to Mount Kailash and was received spiritual advice from Lord Shiva. After some time, he went to tamil nadu, and met the great Maharishi Agathiyar in Pothigai mountain. While on his way, to tamil nadu, he saw a group of cows which were looked worrying due to the death of their cowherd, Moolan, who was bitten by a snake. He used his spiritual power, and transformed his soul from his body to that of the dead cowherd's body. Then the cows became happy, and so he took them to the village. His body was disappeared from the place where he left, and it was made by Lord Shiva. Lord Shiva wanted Sundara Nathar to spread his teachings from the body of Moolan, so that each and every person can understand his teachings. Since the cowherd was called as moolan, from that day onwards Sundara nathar was known by the name of Thirumoolar.

He was a great scholar in yoga and meditation and well versed in all forms of art. He cured the diseases of the people, and made them to concentrate their attention on doing yoga and meditation. He also invoked the bhakti spirit among his followers.

Thirumoolar, a great nayanmar and also a siddhar was a devotee of Lord Shiva. Through his spiritual powers, he has helped the common people to solve their problems in a simplified manner. He taught the principles of shaivism among the common people, and insisted them to worship Lord Shiva. Let us worship this great saint, and be blessed.